Quitting Facebook improves the quality of your life (a lot!) Why? There’s so many reasons but here are a few that stand out.

How long do you spend on Facebook everyday? Multiply that by 365. That’s how much extra time you will have in the next year to enjoy, create, sleep, meditate, get fit, spend time with your kids, learn a new language, learn a new skill – whatever you want to do. It’s yours. Immediately!

2.) You have more energy

Imagine what you could spend your mind power on instead.

Facebook posts just show a snapshot of people’s lives that is usually just the amazing parts.

When you start to compare your life against the positive snapshots of other people’s it can make you feel depressed.

It’s a constant reminder of where you’re not measuring up.

What I found is that I was often looking at Facebook as a distraction to numb emotional pain such as anxiety, boredom, anger or sadness. I was finding that when I felt “negative” emotions, I would often go straight on Facebook to avoid feeling them too deeply. Although it may seem that numbing pain is a good thing, it’s not a great solution in the long term.

By numbing pain with Facebook we don’t get to have space for our emotions. Instead we bury the pain. Burying our pain doesn’t get rid of it, it will always resurface – often at times when we would prefer it didn’t.

For example, one reason I looked at Facebook was when I felt lonely or sad and craved connection. I tried to get this feeling of connection via Facebook. Although Facebook can offer a kind of connection, it is always a poor substitute. Letting go of Facebook allows me to connect more fully with myself which makes me feel much happier..

You can connect with yourself in a number of ways. Just do anything that lets you be in the present. This could be sitting, meditation, doing something you really enjoy just for fun such as some form of play, a walk, creating with your hands (cook, garden, sew, make something, write, create), drink a hot cup of tea – the list is endless.

Avoid the mindless scrolling of Facebook and be with yourself. It’s much better for your emotional health.

5.) You do more things that you love

There’s no two ways about it, giving up Facebook leads to you doing more things you love and enjoy.

I found a good way to give up Facebook was to have a substitute activity in place for when the craving gets too much. If possible make it an activity or habit which is good for you and that you love. For example, instead of Facebook, partake in your favorite hobby, read a book, go for a walk, watch something interesting, phone a friend, learn a new skill or learn a language.

When I gave up Facebook I started learning French. Every time I had the urge to look at Facebook, I watched some French TV instead. I can’t tell you how my French has improved after swapping one activity with another. This also led me to join a French conversation class. I get more connection through talking to people in the conversation class than I ever did from scrolling my newsfeed. Which leads me onto my next point…

6.) You have better real life connections with people

Giving up Facebook has led to me having fuller connections in actual life. For many reasons.

You let go of all the fleeting thoughts of all the people on Facebook that you don’t actually know. You can forget the people you knew years ago and no longer see or the people who you met once at a party. This leaves for more time and energy for connection with people you actually do know and see in person.

Additionally, the people that matter to you will become apparent because they will stay in your life

7.) You have the skill to tackle other addictions

I have found that giving up Facebook has given me the ability to give up other addictions.

When I gave up Facebook there was often a very strong feeling of desire to check my account and get relief from the addiction. In some cases the desire feels so strong, it seems impossible to resist – but it is always possible.

If I sat with the desire and accepted it without acting on it, it eventually passed. It would get quite strong for a while but I allowed it to be there and eventually it lessened.

You can do this with any addiction or strong desire that you have. Whenever you get the urge to give into a craving, just sit with it and accept it. Don’t act on it and eventually the urge passes. The cravings and urges get weaker and weaker until you find it much easier to give up anything you’re addicted to.

After you’ve given up Facebook for a while, if you ever go back – not that you will want to, you will see that Facebook is actually very boring.

I promise, you will wonder why you were so addicted to being there. Just be wary about going back because it is easy to get sucked back in. Why? It’s Facebook’s algorithm, they are masters of giving you small hits of dopamine so that you keep going back for more.

9.) You let go of the constant noise of other people’s opinions and lives.

If you boil it down, most of Facebook is just a constant noise of what other people think or are doing. You really don’t need to know if your friend Michelle still opposes the Covid vaccine, what Nadine’s (who you knew from school) new kitchen looks like or that Paula’s kids (who you met once at a work event) got an amazing report at school. It’s just not important to you and it doesn’t add anything to your life apart from filling up your mind with useless information.

10.) It only takes 48 hours of not looking at Facebook for it to start to lose its grip

When you give up Facebook, just commit to going for 48 hours at first. You will find that the urge to check Facebook really lessens after this time. Your mind will already feel lighter after 48 hours and you will feel better.

That’s not to say that after 48 hours there won’t be urges to check Facebook. You do still get the urge to check it, but it’s not as strong. It’s easier to ignore. There will be times that the desire to get back on there feels strong especially if you are feeling low. But at times like these you can use one of the strategies listed in this article to avoid going back on there. Do something else you really enjoy or just sit with the craving until it passes.

11.) You replace FOMO with JOMO

One reason people often don’t quit Facebook is because there is a fear of missing out (FOMO). There may be notifications from certain groups or friends that you are scared you will miss.

However, once you give up you’ll find you never really miss out on anything. You always seem to always get the information you need.

Ask yourself, is it really true that you need to get certain pieces of information from Facebook? And if you answer yes, is there another way you can be kept in the loop?

When you give up Facebook, you’ll find that most of the information you think you need, you actually don’t.

Consider replacing FOMO with JOMO (the joy of missing out). The joy of living a life independent from having to know the ins and outs of everybody else’s lives. The joy of not knowing about every single event and party – and just living your life having what comes to you. You’ll find the important things will make their way to you without social media and the noise that comes with it. 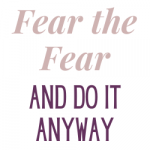 23 Powerful Feel The Fear and Do It Anyway Quotes 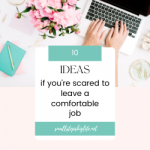 10 Ideas if You’re Scared To Leave A Comfortable Job 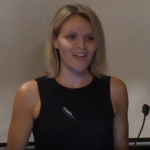 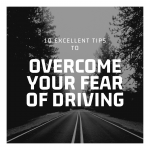